Shanti wound her window down and inhaled the fumes. She loved these late-night gas station runs with Appa. It was their time together. No Amma worrying over money, or which Aunty had insulted her this week. No Anna, pretending to be older than his years, trying to impress Appa by discussing politics like a good son, or whether the stock market was a pig or a cow; some animal Shanti couldn’t remember. It was just her and Appa, an exclusive event.

“Stop smelling the gas, Little One. It’ll make you sick.” Appa waved the attendant to Shanti’s side of the car to fill the tank.

She wouldn’t have this time with Appa for much longer. The hesitant splatters of her first period had made their appearance yesterday. Soon, Amma would organise a dinner with the women of the community. Only the women.

Amma always came home from those invitation-only events looking flushed and happy, and humming old Tamil movie songs. It was the only time Shanti ever saw Amma with her sari not perfectly pleated and draped, with errant hairs escaping the constriction of her tight bun, with her face softer, her cheeks fuller.

Last month it was her best friend Dharmala’s turn. Aunty Surija evicted Uncle Dipesh and readied their home. Shanti wasn’t invited. She stayed home with Appa, Anna, and Uncle Dipesh, watched reruns of Hogan’s Heroes, and sulkily imagined Dharmala, the jewel at the centre of a gaggle of singing, chattering women.

The following day, Shanti and Amma went to Dharmala’s house, their arms laden with enormous Tupperware containers full of laddus. Dharmala avoided her. Shanti tried to corner Dharmala, to share secrets and giggle like they’d always done, but Dharmala yanked her arm out of reach and turned her back. Shanti evaporated into a rain cloud that never fell.

Only a few years older than her, the boy had tightly cropped white-blonde hair and cold eyes the colour of quenched steel. “You go to Cullman High. Shanti, right?”

“Yeah.” Shanti wracked her brain. How did he know her?

“Yeah, you’re in Mrs. Bailey’s homeroom. My kid-brother Dale’s in the same class. He’s always talking about the pretty Indian girl. I guess that’s you, huh?” The boy leered, his grin a veiled threat.

Shanti was the only Indian girl in Mrs. Bailey’s class, but in the sea of boys she never paid attention to, she had no idea which one was Dale.

“How much?” Appa peered over the top of his glasses at the boy.

“Thirty dollars. You wan’ me to check the oil?” The boy’s eyes never wavered from Shanti.

Appa shook his head, and fished for his wallet. The boy reached his arm across Shanti, a hair’s breadth between them. A confederate flag tattoo on his forearm peeked from beneath his rolled-up sleeve. Appa counted crisp new five dollar notes into the open hand. The boy’s fingers closed into a tight fist around the notes and his arm bungeed out of the open window.

She wound the window up, an invisible shield between herself and the still leering boy. Shanti shuddered.

“Do you know him, Little One?” Appa’s voice was edged with weariness and wariness.

“No, Appa. He says his brother’s in Mrs. Bailey’s class. I don’t remember him.” A sour silence squeezed its way into the front seat of the car and sat mulishly between them.

Shanti stared out the window, every breath, every swallow sounding like a holler in the quiet.

“I think this will be the last of our night time adventures, Little One,” he said sadly, and rain cloud Shanti gained a little more precipitation.

Then, as quickly as it had darkened, Appa’s mood suddenly lifted.

“Your Amma forgot to get candles for tomorrow’s puja. She goes shopping every day, but something’s always missing,” he chuckled, his face full of mischief. “If we go past the Indian grocery we can get some gulab jamuns, too.”

He put his finger to his pursed lips to seal the shared secret, the gas station tension dissipating into hazy memory. Rain cloud Shanti released her load. 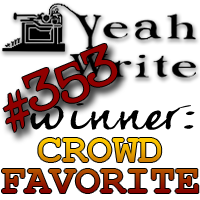 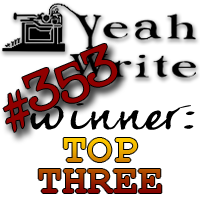 This was written for YeahWrite #353 Fiction|poetry challenge using the prompts a gas station attendant and the phrase something’s always missing. Click the badge to read other entries using these prompts, or erasure poems. Don’t forget to comment and vote while you’re there!