What starts with ‘F’ and ends with ‘uck’?

When my eldest was still shorter than me, still small enough to clamber up onto my lap, take my face in his chubby little hands, and very seriously demand my attention, we lived in a remote town in the far northwest of Australia. (Now he demands my attention by shoving his phone two inches from my nose and insisting I watch whatever video, or chuckle at whatever meme he’s found — like he’s doing as I type this.)

My youngest was a baby then. Just 13 days old when we moved, he was the infant every parenting book aimed for; regular as clockwork, a good sleeper, an intuitive suckler, and happy. And I was still kidding myself that I could complete my Masters in comparative linguistics while wrangling two tiny children.

We lived in spectacular, big-sky country where horizons yawned, from the endless expanse of russet Pilbara dirt sporting a five-o’clock shadow of spinifex in the south, to the warm, teeming waters of the Indian Ocean in the north.

The ferrous-rich soils have lured iron ore miners since the 1960s, and natural gas seams off the coast brought the influx of oil and gas companies. In the towns of the region, trucks twice the height of houses, with wheels that eclipse the sun as you drive next to them are a common sight. You learn to pull off onto the soft, sandy shoulders of the road and wait when road trains carrying enormous concrete pipes come towards you.

The town we lived in had no traffic lights at the time. There was one hotel with a nice restaurant, no butcher, no KFC, and the nearest Target was a 250 kilometre drive away. The pace of life was leisurely, with early starts and afternoon siestas because of the oppressive heat. There was an abundance of oddball flora, fauna, geographic features in every direction. It was an idyllic place to raise small children.

As my eldest’s vocabulary grew, encompassing the natural world around him, he took great pride in excitedly shrieking from his carseat, the names of things that he could identify.

“A kangawoo and a emoo, Amma!” he’d call, pointing with both arms outstretched, fingers splayed on the window as if, if they’d only agree to come a little closer, he could pat them.

His delighted chirrups punctuated trips to buy groceries, trips to playgroup, trips to the shell-covered beach, and trips to Aboriginal communities so I could check my research. Every time we got in the car, we’d have his glee-filled running commentary of the things he could see out of the window.

Anyone who’s spent time around small children knows that consonant clusters are tricky for them. Often, they’ll find creative ways around those sounds in words. Especially when they occur at the beginning of words. The word “truck” starts with a consonant cluster; “tr-“.

My child, aged two, could not say “tr-“. Instead, he replaced it with “f-“. A fact I discovered one day when we arrived at the local shopping centre, the only one in town, and he spotted one of the enormous mining trucks hurtling along on the highway.

As I lifted him out of the car, his little body stiffened, and wave after wave of excitement broke across his face. As soon as his feet hit the ground, he hopped up and down, pointed with both arms at stiff right angles to his body, looking like a hyperactive miniature zombie, and yelled at the top of his voice,

I’m writing for YeahWrite #352’s non-fiction grid. Click on the badge to go to the grid and see the other entries. Don’t forget to read, comment, and vote while you’re there! 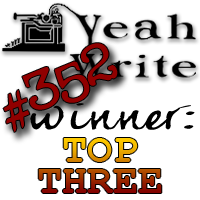