It had been a year since the accident. His memory of that night was still sketchy. They’d been at the Andersons’ for dinner. Lars had been overgenerous with the wine, as usual. He’d argued with Gillian over who should drive home. Gillian had driven. No, he had. There was a deer. A tree. The hospital.

Months hooked up to a respirator, and round-the-clock medical care had followed.

Gillian was gone. He’d overheard the nurses. Nobody had thought to tell him that she’d slipped away. The rest was a blur of machines and medical staff. None of it felt important. Till this morning.

They’d finally switched off that damned respirator and unplugged him from it. He was free.

They’d kept him in the bed, of course, observations, and whatnot, but he’d found a quiet moment when the weeping visitors had left, when the nurses were busy at their station, and he’d made a run for it.

Kevin had walked the unfamiliar streets around the hospital. He’d walked till he couldn’t feel his feet. He hadn’t known where to go, what to do. He’d lost Gillian, had never begged her forgiveness, had never kissed her one last time. His last words to her had been spat in irritation and hubris.

On his third pass by Madame Veronica’s, he stopped. Maybe his feet were tired, maybe he’d given up. He read the sign again, then peered through the glass. The musty shelves were overstuffed with novelty store trinkets designed to set the mood. Crystal balls held aloft by herds of dragons, plastic claw back-scratchers, Tarot cards, and wands. Madame Veronica was bound to be a hoax.

“Hello, pet. I’ve been expecting you” Madame Veronica, framed in the doorway, beckoned to him.

She looked like a quilt stuffed with too much batting, but she had the kindest amber eyes Kevin had ever seen.

“Come in, love. I was just about to put the kettle on.” Kevin let himself be ushered into the dimly lit shop. Lighting for effect, he imagined. It probably helped the more timorous to believe in all this nonsense.

“She’ll be here any minute, ya know.” How did he know she was talking about Gillian? How was he so certain?

“Got in touch months ago. She was in quite a flap about you, desperate to make contact. She wasn’t a believer then.” Madame Veronica chuckled quietly. “They all come ‘round in the end.”

“Blames herself, poor lamb.” Her eyebrows tilted further downwards at the edges, reminding Kevin of Saturday morning cartoons and Droopy dog. He almost let out a guffaw, but Madame Veronica’s head jerked up and she fixed him with those amber eyes. “She’s here.”

Kevin couldn’t tear his gaze from those eyes. He felt himself sucked into them, like he was no more substantial than smoke. His vision clouded. He heard the front door open and close, recognised the familiar scent of citrus and clove, of Gillian. Even before his vision cleared, even before she spoke, he knew it was her.

Gillian stood in front of him. A silvery scar decorated her temple above her right eyebrow. That was new. Her shoulders drooped more, her back seemed more hunched. She looked tired, like she slept too little and cried too much.

“Madame Veronica, is he here?” Gillian’s voice was distant, muffled.

Words jostled each other to spill from his mouth, logjammed, and sealed his lips. He managed a weak nod. Why couldn’t she see him?

“Oh, Kev.” Gillian slapped a hand to her mouth. “I — I never in a million years thought I’d have to say this to your ghost. I should have driven. You were in no fit state. I’m sorry.” 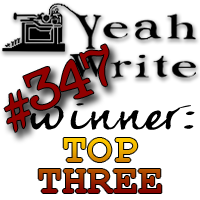