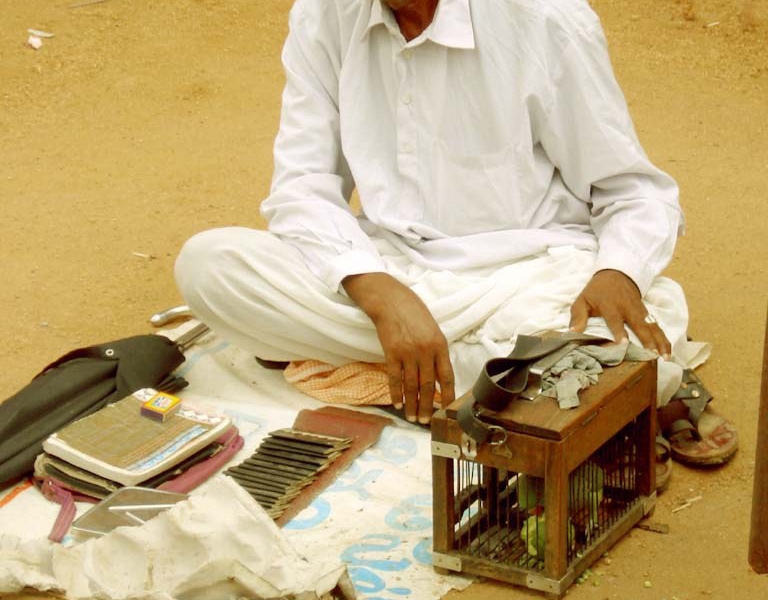 “Charlatan! Mountebank! Rogue!” Angry arrows of spittle punctuated each word. Like some fearsome avenging Statue of Liberty, the woman waved her bag held aloft at the roadside fortune teller.

“Madam, what can I do? It is the will of the gods and the parrot. Kali’s fortunes are as true as her feathers are green. She is never wrong.” Raju bustled his parrot back into her tiny cage. It wouldn’t do for a disgruntled customer to damage the talent.

It was always this way when the reading was unfavourable. They would call him every name under the sun, accusing him of somehow manipulating the cards. As if they could not see clearly that he had nothing to do with it. The cards were always shuffled by the customer. They placed them down in a pile. They asked the questions. Then Kali, released from her cage, would pick the cards that answered their questions. His only intervention was to unhitch the lock on Kali’s cage.

After they were done with him, they’d turn their attention to Kali; claiming she had somehow manipulated the cards, or that she’d been trained to pick only certain cards. Always, they had seen a programme on the television that showed how a counting horse had been trained by the owner to stamp its hoof on cue to a nod or blink. Always, the stamping counting horse was pointed to as the prime example of hoodwinkery. As if Kali were no smarter than a horse.

Finally, the customer would blame the gods, blame their karma, blame some terrible past life, and accept their fate. It was always this way.

“Madam, you asked the questions, you shuffled the cards, and you set them down. Kali picks what she picks. Her methods are beyond my reckoning.” Raju stacked the cards together.

“Wait. I’m sorry. It’s not you. Or the bird.” The fight went out of the woman and Raju was reminded of a deflating balloon, full of hot air and puffery one minute, sagging and wrinkled the next.

“Is the bird absolutely certain?” The woman clutched her hands together, intertwining her fingers.

Raju pursed his lips and gave a brief nod.

“Geeta, there you are.” The man snaked a possessive arm around the woman’s waist. “I’ve been looking for you through the whole bazaar. You don’t believe in this fortune telling nonsense, do you?”

She leaned into him, projecting the picture of a perfect, loving couple. Only Raju saw the slight flare of her nostrils, the widening of her eyes, the set of her jaw.