In January of 2012, my my mother’s younger sister, my small mother, my Cheriamma went kicking and flailing out of this world. The end of her life was as she had always lived it, full of fight, and on her own terms. Cheriamma was a brilliant, beautiful, eccentric woman who encountered academic failure for the first time at university. And with that first failure, she left her degree, enrolled in secretarial school, and set about finding work. If you don’t try, you can’t fail. A funny, generous, loving woman who never married, she was adored by her nieces and nephews. And her many many cats.

While my maternal grandmother was still alive, the cats were contained in number. These were not domesticated, healthy animals. They were not breeds to be shown for their fur, their stance, or their lineage. These were mangy beasts that roamed the streets. They were members of feline street gangs that howled, prowled and growled, rummaged through rubbish, and scratched and clawed any who dared approach.

Cheriamma would come upon them, starving in the streets, pluck them maternally by the scruff of the neck, and carry them home to be cared for. In their ones and twos, these cats could be tamed, they could be taught politeness and a putting away of claws. In their ones and twos, they could be managed, fed, and cared for. Some adapted to their new lives so well, they even became sociable. Most took on the demeanour of a caged beast, pacing its confinement, aware of the dilemma of no longer being able to fend for itself on the streets. All were Cheriamma’s jellicles, her dear little ones that inhabited the vault in her heart reserved for children.

Cheriamma, despite the persistent and regular urgings of her siblings, decided that marriage wasn’t going to be possible, and that the full time care of her mother fell to her. I see her point. How does one successfully divide her attention and emotion between a newly acquired husband and an ageing mother?

Husbandless, childless, at a time when women with careers were almost unheard of in Kerala, she walked her own path. She may have unwittingly been my first feminist mentor, and possibly also the person from whom I learned compassion for animals. Like all mentors, she was a complex composite of conflicting ideas. Despite her marital status, despite her independence, she had firm ideas about gender roles, especially within a marriage, and was conservative in many ways. A hang over from her upbringing, from the social context in which she was raised, perhaps. Yet, for someone who forged her own path in life, it seemed so antithetical.

All the energy and emotion she didn’t invest in a family of her own, she bestowed upon her nieces and nephews. And her cats.

When my grandmother died in 1985, Cheriamma was given free reign to populate her sadness with more cats. They multiplied exponentially, cat upon cat, crammed in crevices mewling their laments. It was a maths of cats.

The first time the CEO met her, there were 22 of them. Tumbleweeds of fur in various stages of unkemptness, raising the ambient odour of ammonia to dangerous levels, howling, hissing, and growling like thunder rolling throughout the house. She became the quintessential cat lady, she of the Simpsons cartoon, brilliant as a child, thwarted and burnt out as an adult, seeking psychological refuge in creatures as clever and wild as she. 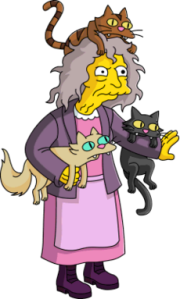 When Godzilla and the TeenWolf first met her, Cheriamma had recently moved into a new apartment. She had made several attempts to convince the cacophony of cats to accompany her, but they had heard the call of the wild, and went gleefully on their way. In her new apartment, there was only one regular feline visitor, though Cheriamma was doing her eccentric best to encourage others. By the end of the week we spent with her, even the lone survivor was having second thoughts, goaded by my constant shooing, and cleaning of every surface.

The last time we saw Cheriamma was at the end of 2010, a little more than a year before she died. She was still in her apartment, still living life on her terms, but the cats were gone.

Where are the cats, Cheriamma? Who’s caring for them?

Chased away by more health conscious neighbours, they had abandoned her without a backwards glance. With no mother, no family of her own, and now no cats to care for, she was forced into greater interactions with friends and family.

Like a spell cast, with the loss of her familiars, her spirit waned. Without her cats to soften her, she became sharper edged, less tolerant. Whether a mark of her age, or her catlessness, she also became jarringly dependent on others. The feisty, self-reliant woman I had always known, was inch by inch, replaced by a needy stranger.

Perhaps she was ageing and in pain, or perhaps the binds between her psyche and her cats had been stronger than any of us had understood.

UPDATE: You can find a related literary piece, Rajeshwari’s Guide to the Care and Keeping of Cats, by me over at Dead Housekeeping!

10 Replies to “A Tale of Familiars”