Gather round, grab a bean bag, get comfortable. I’ve got some things to get off my chest, so let’s start with my story of expatriation and repatriation. 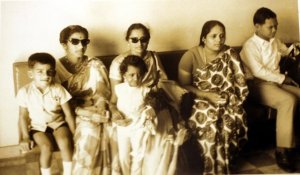 Fashionable and stylish on our departure from Brunei

On the 1st of February 1975, my parents and I arrived in Australia from Brunei as new migrants. My mother was 41, my father 47. I wasn’t yet 6 years old. My siblings would join us from India a few months later as we set out to reunite the family. Through a series of circumstances and choices, we found ourselves uprooted both from the home my parents had created in Brunei, and from the boarding schools my siblings had called home for so many years. We were flung together, casting about for a foothold in our new country, our new home, trying to stitch up the edges of a family.

I was witness to those early years of negotiating place and space between my parents and my near-adult siblings. Those were difficult years for everyone. My siblings had grown up away from us, they’d learned to navigate the vagaries of a boarding school, of a college system, far from the support and advocacy of their parents. It must have been relentless for them; the daily charade we all play at school and university, but with no cessation when they got home, no down time, no space to be truly themselves. It must have been equally difficult for my parents who sent off their babies at 13, 12 and 10 to live in another country, intimately familiar but an ocean away, only to have them return as independent adults who’d formed their own ideas, their own opinions.

One of the things that united us was that we were all so out of place in this new place. Misfits in a foreign land, we beamed our thousand watt smiles at every passing stranger. Our brown faces turned like sunflowers hoping to catch the glow of friendship from these shimmering white people with their white blonde hair. My eyes, more used to different hues of brown, shades of colour that hinted at rich, aromatic cultures, could not absorb my surroundings quickly enough.  Our clothes, the endless metres of material, the vibrant colours of the tropics, marked us further as out of place. Even in the neon-hued ’70s scape of Australia we were too vivid, too colourful, or simply too foreign.

My accent, heavy with the influences of the Malay and Malayalam I’d been surrounded by, formed a barrier between me and the shimmering white children that now dotted my school yard. Despite my most polished efforts at communication, they had no clue what I was trying to say. And, as children often do when confronted with the unfamiliar, they mimicked, teased, or simply ignored me. My first school was an abject failure for friendships, but it did teach me the valuable lesson of camouflage. There was nothing to be done about my skin, of course, but in less time than it takes to say “errr, you talk funny”, I’d adopted an over-exaggerated Australian accent and was negating with a “noi” along with the rest of my peers.

You may be asking why this is relevant now. After all, these are events that should be relegated to the annals of history and every migrant’s experience. But these thoughts linger in the antechamber of my memories because it struck me that I’m now 47, the same age my father was when we first came to Australia, and I find myself returning to the country I call home. Unexpectedly. Hurriedly. I find myself on the self-same shores, smelling the salty air, listening to the laid back, nasal accents around me. Instead of feeling out of place, instead of feeling entirely foreign, I have an odd mix of resistance and joy at the reunion.

I delight at people unhurriedly saying “no worries, love. Take your time”, or hearing an unbleeped expletive on TV,  at watching current affairs programme presenters eviscerate former Prime Ministers with no greater regard for them than they would have for anyone else. I’ve missed the relative social egalitarianism, where your doctor is not any more important than your plumber, and everyone is called by their first name (except possibly your teachers… but wait till you’re in Year 12, kids!). I’ve longed for the genuine friendliness of strangers who invite you to come over for a cuppa, and mean it.

All licensing centres seem to have food ground into the carpet

But I’d also forgotten how unremittingly white this place is. Don’t get me wrong, there are more people of colour here now than there were 41 years ago, but Australia’s idea of multiculturalism still hinges on the different shades of European migrant, all of whom like to explain in detail how excluded they felt growing up here. I don’t doubt they felt excluded. I don’t doubt their accents, the contents of their lunch boxes, their embarrassingly “other” parents all set them apart from Shazza and Dazza in the school yard. But frankly, all they had to do to blend in was keep their mouths and their lunch boxes shut. And the privilege of that camouflage has never occurred to them. Not even now.

This colour blindness that afflicts so many, manifests in casually racist commentary more often than not. Most recently, I encountered the following conversation at the Licensing Centre when we went to get local driver’s licences.

[Scene: Oldest child and I discussing the transfer of his Texas licence to a Western Australian licence. I have almost no voice because of illness]

Woman at counter: (mild but noticeable English accent) So which state did you hold this licence in?

WaC: Oh! That must have been very different.

Godzilla and me: Yes. Very different.

WaC: Not so much diversity there, I suppose.

WaC: There’s a lot of diversity here! (looking pointedly at me) Not as much as where you’re from, I’m sure, but still a very diverse place.

Me:…. *squeak*…. (thinks about a diatribe with barely audible voice. Rethinks. Thinks about a sarcastic quip as response. Rethinks. Decides we need the licence more than I need to right this wrong and holds tongue)

In that one lazy assumption, a woman I didn’t know had decided that I (with no accent other than an Australian one) was more foreign than she (with her English accent) purely on the basis of my appearance. It was a sobering reminder of what life looks like when you live in a largely white community whose members don’t examine their own privilege.

So, that’s part one of my impressions on being home. Tune in for more next time.

← Big Moves
An Ode to Things and a Farewell →

1 Comments on “Then and Now”