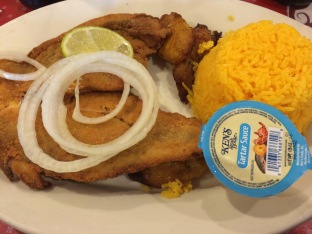 Our second day of vacation in Key West, we Yelped for restaurants not too far away (always a criterion when moody teenagers are in tow), and El Sibonéy came up. The rating was good, though not stellar, but the reviews piqued our interest. They were resoundingly good.

We headed out for a late-ish lunch, bellies rumbling, tempers just beginning to fray. Only a very few confused, hangry directions later, we found this unassuming treasure.

The building’s a brick 1970s home, gutted and converted into this bustling Cuban restaurant. From the outside, apart from the snaking line of waiting diners, there’s nothing to suggest that this is somewhere you might obtain an actual meal.

This isn’t your high-end, fancy-pants, get-dressed-to-the-nines kind of eatery. This is the place you go with your loud, gesticulating family and friends. Where you go so often the staff u you by name. Where you order off-menu because the chef has just made a dish that you simply have to try. Not us, obviously, since we were vacationing there, not locals. We were fairly obviously tourists, but then, so were probably 1/3 of the other customers.

We poked our heads in and looked around. Waitstaff scurrying this way and that, were taking and filling orders, never standing still for long. Aromas jostled and competed for dominance, prompting a prickle at the underside of my tongue. With saliva gushing across my tastebuds, I cast around looking for an entry to this culinary Carnival. The walls reverberated with the sounds of clanging pots, and joyously chattering diners. This was definitely where I wanted to eat!

A short 15 minute wait (the late lunch was either not as late as we thought, or was the norm around these parts), and we were shown to our table in the heart of the restaurant. Flanked by a large gathering on one side, and full tables on every other side, we squeezed into our seats. With barely room for waitstaff to inch past, you’re packed snuggly in. This isn’t as bad as you might imagine (apart from the noise levels — this is not the restaurant for you if you have hearing difficulties, or are extremely sensitive to noise). Being densely packed together gave me the chance to peer at what everyone else had ordered, and what looked good. Here’s a clue: it all looked good. This wasn’t helping with my own laboured decision making as I poured over the menu.

Eventually deciding on the yellowtail filets with yellow rice and fried plantains, I thought I’d sit back a little and people watch. It’s hard to know where to rest your eyes, between waiters with creative hair cuts, a constant stream of diners, waitresses with the most vibrant and stunning lipstick I’ve ever seen, and food that is as much a feast for the eyes as for the other senses, in every direction. I whisked my head this way and that to try to take it all in, but only succeeded in giving myself whiplash. Fortunately the service is incredibly quick, and before my neck could look like Reed Richards had spent too much time on a tanning bed, our meals arrived.

The presentation was simple, nothing fancy, no great artistry, but the aromas! They grabbed you by the collar and leapt into your nose before the plate had even hit the table. My salivary glands were working overtime, and it was a veritable Niagara Falls in my mouth. The anticipation of that first mouthful was almost too much to bear.

It was worth it. The crisp batter cracked between my teeth to reveal moist, white flesh inside. Yellowtail’s an ocean fish (one of the snapper family), so it doesn’t have that muddy, silty taste of river fish. The firm, sweetish flesh is best described as ‘clean’. Combined with the fragrant yellow rice, and the garnish onions, it hit every note exactly right.  Just the right amount of seasoning, aromatics, and the wonderful combinations of textures; crunch giving way to silkiness. Then, the fried plantains that immediately brought memories of pazham pori in Kerala to the front of my mind! Sweet, starchy, with just a hint of bitterness where the banana had caramelised, this was the stuff of my childhood and could evoke a sense of home in me immediately.

The cacophony, the crowding, the crush of humanity grew more muted with each mouthful. My jiggling, jiving tastebuds demanded resources from all my other senses. There was no possibility of a distraction, I was at the serious business of relishing this food.

As my plate emptied, my heart grew heavier. Was it possible to mourn the end of a meal? Would I miss the aroma of onion wadded in my mouth and nose? Would my jaw slacken, deprived of its masticatory delight? I strived to cling to every molecule of flavour, every memory and sensation evoked before it evaporated into the morass of meals enjoyed. As intense as the experience was, the flavours faded into wisps of memory, leaving behind a slight hollowness.

There was really only one cure for it. Dessert. Bring forth the flan (pronounced FLAH-N, not rhyming with ‘pan’)! Similar to its European cousin, the crème caramel, the South American flan has an even more caramelised syrup and is less sweet. The flan at El Sibonéy isn’t large, it doesn’t have pretentious of cakedom, and makes no grand statements with its stature. What it lacks in size, it makes up for in taste. This is one of the finest examples of flan I’ve ever eaten.  It slips effortlessly into the mouth and down the throat, leaving a trail of bitter sweet in its wake. It’s just enough to finish the meal with the high notes of baked custard, without making you feel like the walls of your stomach have stretched beyond repair.

Filled, sated, and smug, my imagination was now free to roam the possibilities of a vacation in Cuba. In my full-stomach, satisfied vision, it was all white linen, straw hats, mojitos, glorious food, and a buzzing literary and music scene — a sanitised, romanticised Hollywood view.

There’s no trip to Cuba on the horizon, but another visit to El Sibonéy did happen a few days later. Again, I had Yellowtail, but the whole fried version this time. And this time, in a piscine homage to Hemingway, the fish defeated me.